University of Washington, Seattle.
Why Homer? Homer has been part of my life since I started university. My first friend at university was a Greek Australian, Greek Cyprian to be exact, who in an act of φιλοξενία invited me to her home and introduced me to her family. There in a special room her mother was weaving a tapestry; it was scenes from Homer. I have never forgotten the tapestry, her mother’s loom, and the quite pride she had in her daughter learning Ancient Greek. In a sense, I came to Homer because of friendship, hospitality, women and weaving. Weaving: a skill that women have excelled in and been admired for in association with knowledge, since Homer.
​
I would like to thank the AWAWS Selection Committee for awarding me the 2016 AWAWS Research Grant. Throughout 2016 the grant provided me with support to travel overseas to present papers at two significant conferences, and also to conduct research there.
​
The first conference was in May, at the Feminism and Classics VII Quadrennial Conference held at the University of Washington. As a Homerist it was a wonderful opportunity and a privilege to meet and talk with Ruth Schodel and Olga Levaniouk. Both women are well established and respected in the field; they gave me supportive feedback, and later correspondence. Classical Feminists such as Ruby Blondell were helpful and were interested in my work. This particular conference is organised by the American Women’s Classical Caucus; ‘the big sister’ if you will, of AWAWS. It is a very large conference, which drew a breadth of academic experience from established Professors to Early Career Fellows and Post-Graduates. As a result of giving the paper as this conference, an article is in the process of being sent to a journal. Through meeting fellow Homerists at the conference I was also made more aware of the Homer Multi Text Project conducted at the Centre of Hellenic Studies, at Harvard University.

In early November I was invited to give at paper at the Australian National University in Canberra. The intent was to promote and draw attention to AWAWS and promote membership for the Canberra chapter. The other focus was naturally on Homeric studies. I would like to thank the Centre for Classical Studies at the ANU, Fiona Sweet-Formiatti, my friend, colleague and fellow Homerist for her hospitality, and Professor Elizabeth Minchin, Australia’s leading Homerist, who always makes the time, no matter what, even if the phone rings, and who always remembers everything. 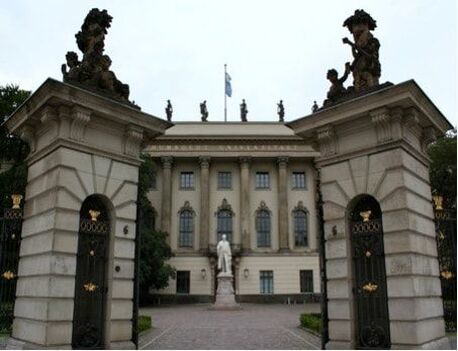 Humboldt University, Berlin.
In early December, I gave a paper at the Paths in Antiquity Conference held by the Excellence Cluster Topoi at Humboldt University in Berlin. This conference focussed on both physical and philosophical journeys and the acquisition of knowledge. The people I met at Humboldt were very interested, thoughtful and reflective of my work. My research is on Helen and the Homeric value systems which involves semantic analysis of key words in Homer. The conclusion of the conference resulted in an offer to write a book chapter for Topoi. This conference also gave me the opportunity to meet and talk with established scholars about the philosophy of language, and current development in comparative epic, particularly ancient epics. This was valuable as it gave me supportive and directed ideas for post-doctoral research.

The AWAWS grant has not just been of financial assistance, but also of an academic and personal support. Having been a teacher for over fifteen years before coming back to university, I have a different perspective on academic life, and life in general. AWAWS recognises that for many women post-graduate education may not occur straight after their Bachelor’s degree, or indeed after their Honours degree. There are many demands on women in society, and instead of trying to ‘have it all,’ life for many has become a series of ‘chapters.’ AWAWS raises an awareness of this and an acceptance of this; that for some women their dreams and directions of their lives may take them to further travels, motherhood, a different career, or partnership. Their academic life may intertwine part-time or full-time with these life directions, or it may be a completely different life chapter.
​
In light of this, I would like to thank AWAWS for not only the financial assistance of the research grant for 2016, but for the organisation’s larger scope in highlighting and strongly supporting the multi-faceted nature particularly of women in academic life.