When I applied for the AWAWS Research Grant in 2018 I did not expect to be considered a serious contender let alone be named as a recipient. It had been some 20 years since my Bachelor’s degree in Classics and Ancient History. Further, I was only in the first twelve months of my PhD in which I was combining a more recent degree in Music with my first love, Classics. I was aware that there were a number of strong applications that were being considered alongside my own and the calibre was high for earlier recipients, so I can honestly say that being awarded the Research Grant was unexpected. The financial relief the Grant provided was wonderful—I was able to put it to good use by renewing my very out-of-date passport and making a generous contribution towards travel for some overseas research—but so much more than that, the validation and recognition of an award like this is invaluable.

We are all aware of the disadvantage women can experience in our working lives. We navigate issues like harassment or invisibility, pay gaps and/or impediments to career advancement—both recognised and hidden. At home, we are more likely to experience an imbalance in domestic responsibilities, especially around the care of children. The perils of career interruptions for women are well-documented and often talked about, but the reality can be harsher than statistics might imply—having and raising children is not a one-time event but can have an ongoing impact. If a relationship breaks down, women are more likely to take on the day-to-day care responsibilities of their children. Or, if someone in the family falls ill or has a disability, women are more likely to take on the added caring responsibilities. For me, all three factors were impactful and resulted in a series of very long gaps between my first degree to my doctoral candidature. To women like me, the acknowledgement that our contributions to research matter despite an inconsistent academic presence is worth so much more than the benefits of financial assistance alone.

Perhaps there is some symmetry, then, that my research centres on Philomela and her voice—a myth that resonates with so many of us for a variety of reasons. I use Ovid’s treatment of Philomela, her resilience, and the metamorphosis of her voice beyond human utterance to assist in considering the plurality of voice in musical settings. While I am interested in the long traditions that situate Philomela and/or the nightingale in both vocal and instrumental music, I am mostly concerned with representations of Philomela in music of the 20th and 21st centuries. This is how I found myself in the United States photographing unpublished scores by Edward T. Cone (Philomela: Three Nightingale Songs [1954-1970]) at Princeton University and exploring the archives of the Computer Music Centre at Columbia University for Milton Babbitt’s paper scrolls used in the composition of Philomel (1964) on the RCA Mark II Sound Synthesizer. This synthesizer, affectionately known as the “Victor”, is still located at the CMC and although it has deteriorated over the years, I was thrilled to be invited to spend a little time examining it. A final treat while visiting the US was an invitation to attend a graduate seminar on the myth of Philomela at Yale University hosted by Associate Professor Pauline LeVen for her students. It was a wonderful morning discussing treatments of Philomela in the context of music with a group of enthusiastic classicists.

In conclusion, I want to express my deepest gratitude to AWAWS and the selection committee in awarding me this grant. I was able to use the funding to assist in a valuable research trip and the public recognition of my research was a significant boost to my confidence. I am honoured to be included among such an amazing group of women in a tradition that I sincerely hope will be available for a very long time to come. 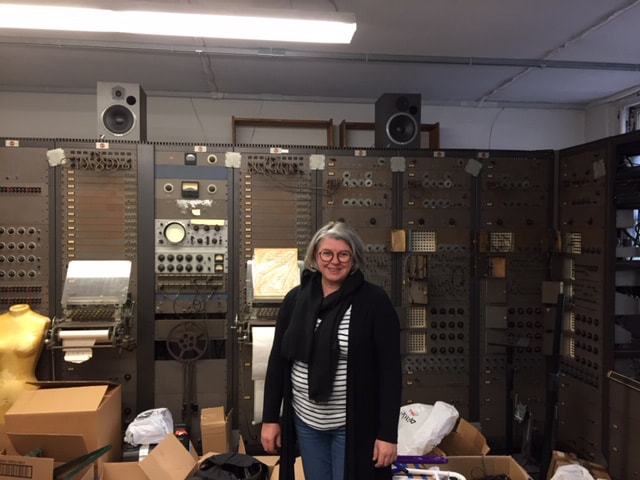